Most of the time we Sense the world with our Expectation. A wall painted white is unlikely to be physically the same colour along its full length, especially if a bright light is shining on it, but we Think it as a white wall. We perceive the world with our knowledge from previous experience.

Sometimes we need to Re-Act to a Life-Threatening Event. In this case the Reptile Brain takes over Control and We Act without Thinking.

The Reptile or Hind Brain is the “oldest” System in the Human Being. It was developed after the Organisms that originated in the Sea started to specialize and therefore got into a Competition. 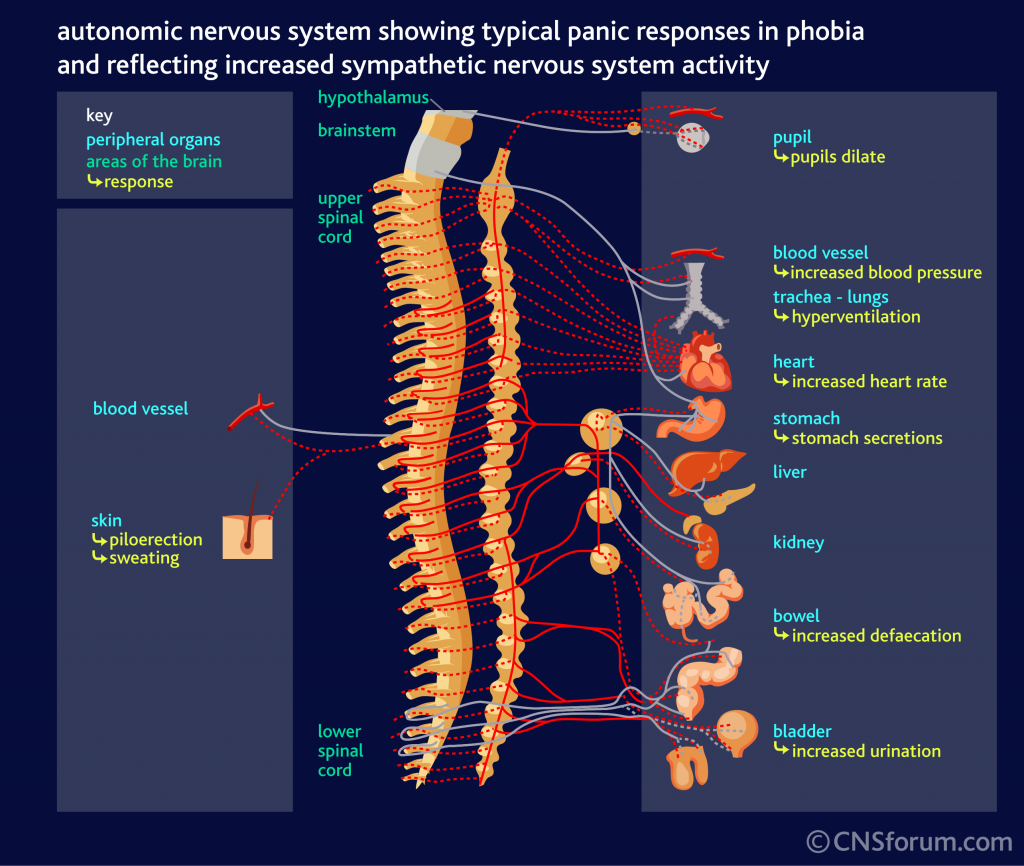 When the Body is Alerted, the Sympathetic Nervous System (SNS) which starts in the Hypothalamus produces Adrenaline. Adrenaline accelerates the heart rate; widens the lungs and raises the blood pressure. The SNS prepares the body to Move Away (Flight) from the Emergency or to Attack the Emergency (Fight). The third way to Re-Act (Freeze) is to Hide and become Invisible.

When the State of Urgency is gone the Parasympathetic Nervous System (PSNS) produces Acetylcholine which brings the Body Back to its Normal State of Rest.

The SNS is triggered by Real Events and Imaginary Events. When we are getting Exited or Angry the Body is also prepared to Move Away from or to Attack the Emergency.

When the Believe System Believes the Outside World is not to be Trusted,  the Body moves into a permanent State of Stress waiting for the final moment to Act.

Prolonged Stimuli over a certain threshold of Loudness, Brightness and Speed affect the nervous system, as do stimulants in food, drink and drugs. Further, an increase in Acidity at cellular level predisposes the body to sympathetic activity.

This Muscular Armor impairs health because it constricts and inhibits spontaneous processes in general (i.e. including feelings and thoughts), such as Breathing, the Blood Circulation and the Lymphatic Circulation, which are responsible for clearing the body of Toxins.

On the other hand, chronic parasympathetic activation, which correlates more with psychological collapse and depression, is not healthy either. Its characteristics are the opposite of chronic sympathic activation (low blood pressure, low heart rate,…).

To keep the Body Healthy the Human has to keep a delicate balance between “Real” Action and “Real” Rest.

To get rid of all the Imaginary Actions the Believe System has to be Cleaned Daily (Enough Sleep, Meditation).

Why Mobile Communication is Generating Stress

How to Get Rid of an Addiction to Stress

How the Human came Out of the Sea

About the Reptile Brain