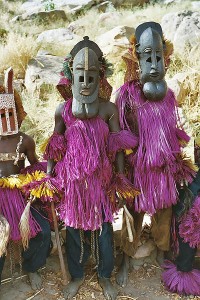 The Dogon are an ethnic group located mainly in the administrative districts of Bandiagara and Douentza in Mali, West Africa.

The Dogons claim that they are related to an extraterrestrial civilization that came from Sirius. They show a spectacular insight in Science and Astronomy.

The Myths of the Dogon have been researched by Vladimir V. Rubtsov, Chairman of the Research Institute On Anomalous Phenomena (RIAP), Kharkov, Ukraine and Robert Temple (The Sirius Mystery).

Their conclusion is that the Dogons have been aware of many recently established scientific facts about the history and structure of the Universe and the Sirius System.

Laird Scranton (the Sacred Symbols of the Dogon) compared the Egyptian Culture with the Dogon Culture. He substituted the pictures of Dogon for equivalent glyph-shapes in Egyptian words and created a new way of reading and interpreting the Egyptian hieroglyphs.

In the end of the book he re-creates a highly mathematical language. This language uses building blocks that are expressed in numbers, symbols and sounds. Just like mathematics higher level symbols are combination of the basic building blocks. Major symbols are also connected to male and female Deities.

Scranton is conviced that the creators of this highly structured language were aware of a Theory of Everything that is highly comparable to what is now called String Theory. The myths of the Dogon are also highly related to old Chinese Science, Alchemy and the Kabbalah.

The following story is a very small part of the complete myths of the Dogon in M. Griaule, G. Dieterlen. The Pale Fox. Chino Valley: Continuum Foundation, 1986. 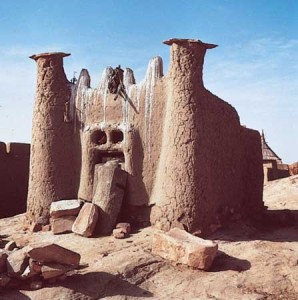 Amma is the Dogon name for Amen or Ammon. Amma is described as the intelligent consciousness behind all of creation and the awareness within all beings. Amma is ‘He Who Rests Upon Nothing’.

The supreme god Amma made the whole Universe within a grain of po. This grain was located inside the “Egg of the World”, it spun and scattered the particles of matter in a sonorous and luminous motion, remaining, however, inaudible and invisible.

Amma placed his Word in the Po, thus making it the ‘Image of the creator’ and ‘the Womb of Amma’ (The Centre of the Universe, A Black Hole).

Amma placed seven ‘Words‘ in the po, which began to vibrate strongly within the seed. The spiraling vibrations caused four clavicles (The Four Powers, Earth, Wind, Fire and Air) to grow forth from the po. (This is one of the many references to String Theory).

Suddenly, the Po burst forth, and eight new seeds were created. Amma planted these seeds in his egg near the clavicles of the Po. 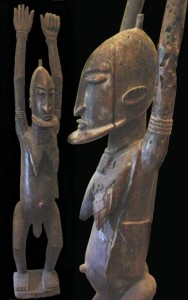 With these eight seeds, Amma intended to create eight celestial beings – four male and four female (The Egyptian Neter). The Dogon called these beings the Nommo Anagonno, ‘The Word that Became the Fish-Man‘.

The Nommo are the first beings created by Amma, and they are amphibious celestial creatures.

These Eight beings were going to be Amma’s perfect creation. The four fish-twins were going to make each other fertile, complete, and blessed with heavenly happiness and fulfillment.

However, one of the male twins – Ogo (the Egyptian Set) – grew impatient. Instead of awaiting patiently the completion of the Amma’s work, he hurriedly made an “Ark” and rushed into space, wishing “to look at the world”.

After several voyages, Ogo landed on the Earth and turned into the pale fox or fennec or Jackal, named Yurugu.

To purify the Universe, Amma decided to sacrifice one of the completed Nommo twins – Nommo Semi (the Egyptian Osiris). Nommo Semi was composed of both a male and female Nommo Anagonno, and was a complete and perfect Being onto itself.

Amma lifted Nommo Semi out of the celestial waters and tied the androgynous fish to the Kilena (Mother of charcoal) tree. In one swift cut, Amma sliced the umbilical cord and genitals of Nommo Semi.

The sacrificed Nommo’s blood & life force – Nyama – emptied from its naval and groin. Semi died a suffering and painful death.

One day called Taba Tolo – the reuniting of the two placentas – will occur. At that day a strong purifying stream of Nyama will pour down on the Sun and Earth from Sirius. This stream will wash away the corrupt order of Ogo and immortalize the sons and daughters of the Nommo.

About the African Origins of Ancient Egypt

About the Nine Spirituals Bodies of Ancient Egypt

About the Egyptian Djed Pillar

About the Logic of Creation

One thought on “About the Dogon”